I kept waiting for the LCU site to put up the player panels and other tables for this year’s leagues, but nothing had shown up even after several of the round one games were played; then I saw this morning on boards.ie that they’ve actually gone up on ChessLeague.net here (I have no idea why they’d maintain two sites, especially when they’re not being fed from a database but generated on someone’s computer, but I guess no-one’s made it easy enough yet):

Division 7 isn’t up yet, but they’re still ironing out the details on that one, so fair enough. There’s also a player list showing everyone back to 2003, and a handy all-on-one-page set of league tables, and of course the all-important upcoming fixtures list (though it seems to have a few divisions missing from it). 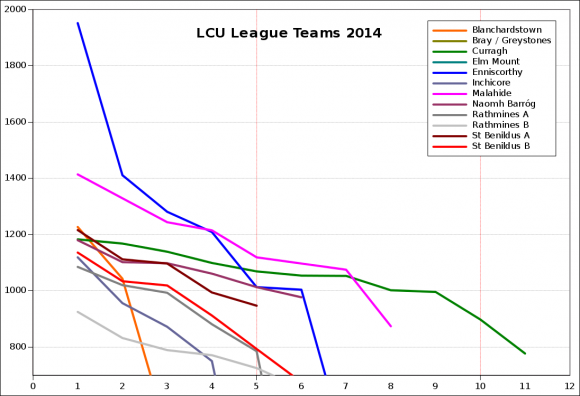 The Curragh club have some nice strength in depth there, though Malahide inches them out given that only five boards can play in a match; Enniscorthy have a 1950 rated player on their panel which is rather skewing things (why they’re playing in the Bodley of all places is something even they couldn’t answer last year), but all it takes is for them to have one or two players unable to make a game (and for Enniscorthy, with all that travel they have to do, that’s a fairly large risk) and they’re going to lose points off several of the teams. Not to mention that it’s the Bodley and the ratings are generally very unstable in the Bodley so they’re not the greatest of indicators. Nonetheless, the top place does look to be a fight between Enniscorthy and Malahide and player attendance levels in Enniscorthy will play a large role there. There’s a lot more contention over third place, with three or four clubs in the league in realistic contention there. Personally I’d like to think Benildus A will take it – they’re lower on ratings, but play up very well, and they have a few decent sub players to call on if needed. So Malahide, Enniscorthy, and Benildus A would be my guess for the top three this year; and I think our team (Benildus B) will come in as seeded, maybe a little better.

Just for fits and giggles by the way, here’s what that graph looked like last year (including both A and B groups): 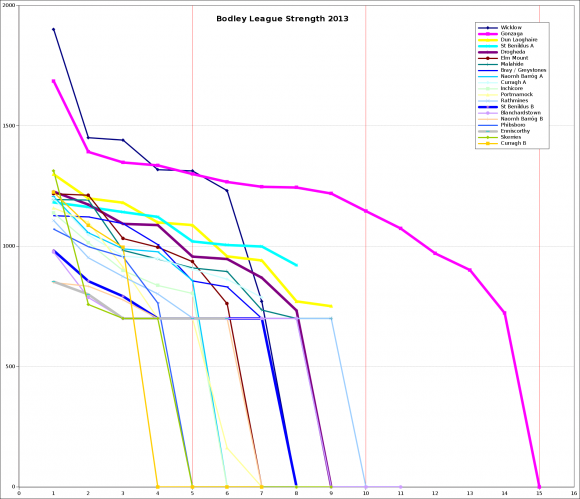 Either way, it’s going to make for an interesting year – and speaking of which, next game is this Wednesday, at home, against Bray/Greystones, which should prove a bit of a challenge if they’re as strong as they were last year, when they could field three 1100s, a 1000, and an 850, which would see us in uphill fights on boards 1 through 4 and at a serious disadvantage on board 5…

This entry was posted on Monday, September 29th, 2014 at 12:24 and is filed under Bodley 2014, General Chess. You can follow any comments to this entry through the RSS 2.0 feed. Both comments and pings are currently closed.